Click here to read my latest article in the June 2014 issue of Intellectual Property Magazine. 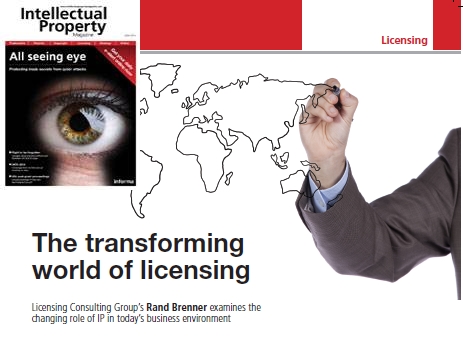 Today the economy is going through a transformation. The term ‘knowledge economy’ is the recognition that knowledge is the driver of innovation and the creation of IP. IP is an enormous value driver for today’s companies, and it’s a value that is just now being recognized.

One of the biggest assets of most companies (public and private) is IP. In the 1970s, IP was not recognized as any kind of “asset.” Traditional assets such as plants, equipment, products, and inventory – tangible assets – comprised the lions’ share of a typical company’s assets. Today, these tangible assets represent less than 20%, and intangible assets – including IP – represent 80% of the balance sheet assets. Yet, the tremendous value of IP is often overlooked. It is viewed as an afterthought – something a company gets to protect its rights and not recognized as a value creator. However, that is quickly changing as stakeholders, investors and shareholders are now recognizing that companies with IP can indeed be very valuable.

The market for IP is huge and growing. According to a recent study by Deloitte & Touche, licensing in the US has grown to about a $500bn industry from just $15bn 25 years ago. The US Patent and Trademark Office estimates the value of IP in the US is worth over $5trn. Countries around the world, such as China and India, that a mere 10 and 15 years ago had weak protection and enforcement of IP rights, now recognize the importance of IP to the growth of their economies in the 21st Century. This recognition is borne out by the ongoing negotiations between countries focused on the harmonization of IP laws around the world.

Click here to view the rest of this article.