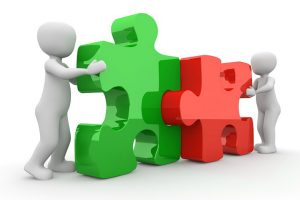 This is the third part of the series on licensing strategies. Part one covered direct licensing and part two discussed sub-licensing, and how to use them to build your licensing program.

The third strategy is strategic alliances – combining resources. This is a good strategy for a startup or early stage company as a way to reduce operational costs and accelerate growth. Partnering with a larger company helps a smaller company confirm its IP value and business model, and get access to capital and other resources.

There’s a number of ways to use this strategy. One of the most common reasons is sharing IP development costs through a co-development agreement, such as for new drugs, prototypes or test marketing. In this case, the partners share in the upside when the IP enters the commercial marketplace. A good example is GE Ventures, who forms strategic alliances with various partners to license, fund and develop a number of early stage technologies created by GE.

A second way of using this strategy is licensing a larger company to take advantage of their lower manufacturing costs. In return, they get the rights to make and sell your IP in specific markets or distribution channels. I’ve used this strategy with several clients who didn’t have the financial resources to fund large orders from big retail accounts. In one case, we licensed international rights to a large company in Europe. As part of the deal terms, we negotiated rights to buy products at a cost that was lower than what they were paying to produce it directly.

Getting access to distribution and sales is another common use of this strategy. And that’s exactly what I did with a toy client from Australia with a patented technology for radio controlled toys. Rather than trying to launch a new product in the US, which is a risky and expensive venture, we used licensing instead. I helped them get licenses to some of the most popular kids characters to use on their toys.

Before approaching the licensors, we had to get all the basis covered. Especially distribution. It’s very tough to get a license to sell kids products if you don’t have any distribution. Instead of using the traditional distribution model of wholesaling products, we formed a strategic alliance distribution partnership with another company on a revenue sharing basis.

This gave my client a stronger company presence, enabling them to license some of the popular kids entertainment characters, get greater retail distribution without the inventory and cost risk, and it attracted more investor capital.

Strategic alliances are also effective in building or expanding a market for your IP. By licensing its disk operating system software (“MS-DOS”) to IBM, Microsoft tapped IBM’s global sales, marketing, and distribution systems, and created a huge market for its software. Another option is sharing IP to reach more customers, such as in the comic book industry, where one publishers’ characters’ appears in one or more stories interacting with another publishers character (know as a cross-over strategic alliance).

Joint ventures are a variation of strategic alliance. The big difference is the JV partners form a new, separate company. It’s owned 50/50 and lays out what each one is bringing to the table, such as IP or manufacturing, as well as how the IP is owned and launched into the market, such as direct sales. For example, partners may agree to jointly own all the IP, or it’s restricted to only IP jointly developed.

Industries with capital-intensive R&D and testing phases, such as pharmaceuticals and biotech, or industries with lots of IP cross-over, such as smart phones, often use a JV strategy. Sometimes it’s used early in the licensing process and then dropped. It’s a good licensing strategy if you want a more active level of participation in the long run.

Keep in mind, your IP is a bundle of rights and you don’t have to include all the rights when using this strategy. In some cases, rights are restricted to certain applications of use, such as for the B-to-B market, or certain territories, such as Europe or Asia only. You can also use licensing to form multiple strategic alliances or joint ventures based on territories, use, applications or product types.