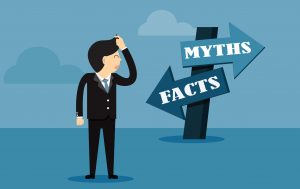 Royalty rates are one of the most mystifying areas of licensing. It’s one of the first questions I’m asked by clients, “how much can we get for the IP”?  There are various formulas for calculating them, such as the Rule of 25%, or the average rate for a particular industry. In the end, it most often comes down to negotiation.

In this article, we’ll take a look a 4 royalty rate myths, and separate the fact from fiction.

Myth #1: The standard royalty rate. While there are ranges of royalties for different types of industries, there is no one “standard” rate for any type of licensing deal. It depends on all sorts of variables, such as is your IP ready for market, how much does it cost to make (or deliver,) is it a breakthrough technology, and many more. Other factors that impact the royalty rate include development time, demand for the IP, licensing deal terms, and negotiation skills of the licensee and licensor.

Entertainment is a good example of how much royalty rates vary. Even if the movie or TV show was a hit, and the “standard” rate was 12%, it always came down to the numbers. If the profit margins for a product were high, such as apparel, the royalty rate was closer to 12%. If it was a low profit margin category, such as publishing, the royalty rate was about 5%. Sometimes I even negotiated a sliding scale based on sales, such as starting at 8% and increasing to 12%.

Myth #2: There is an inherent value for certain types of IP. Not every IP is valuable. Much of it depends on whether it’s market tested, generating revenues or still needs development. If its potential to generate revenues is not known, it’s value remains a question mark. The closer an IP is ready for the market, the higher the royalty rate. If it’s still got a significant amount of development, the royalty rate is likely to be lower.

The royalty rate is also affected by how it can be licensed. Licensing to multiple licensing partners around the world, offering worldwide exclusivity to a single partner, or a disruptive technology in a large industry are all examples of higher royalty rate value terms.

Myth #3: The bigger the innovation, the bigger the royalty. Again, it’s a question of cost versus profitability. If you’ve got a complex new intellectual property for a product that takes thousands of dollars and months and months to build, and is very expensive with low margins, the royalty rate will be lower because the risk is high and the profit margins are not there.

Many great IP’s are developed only to discover later (usually when the IP owner tries to license it) it’s not commercially viable – meaning it isn’t as profitable as the IP owner thought.

Myth #4: The best technology makes the most successful products. Not necessarily the case. Generally it’s the first to market that makes the most revenue. In many cases, inventors spend an inordinate amount of time trying to perfect their IP when in reality what you should be doing is bringing it to market. There are many case studies of products that came to market less than 100% ready (such as Windows software), yet did very well because the owners brought it in to market and continually improved it.

So keep in mind the first to market makes the most money, generally captures the greatest revenue share, and establishes the number one place in the market. You don’t want to spend an inherently large amount of time trying to tweak and fine tune an intellectual property that’s ready to go to market.

A little homework before negotiating your licensing deal will help you figure out a starting point for the royalty rate. Remember there are many ways to structure royalty rates in licensing deals. Royalty rates don’t have to be fixed – they can be tiered, move up, move down or be a flat fee that moves to a percentage. Most important, while there are “industry averages” and formulas, at the end of the day it comes down to what you and your licensing partner negotiate.